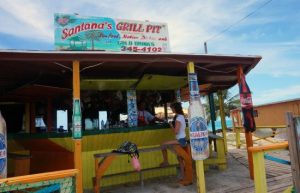 Scenes from two Pirates of the Caribbean movies were filmed on the southern end of Little Exuma—only 12 square miles—and on one of the little cays just offshore. The movies’ stars, Johnny Depp and Orlando Bloom, often roamed around the island and ate at Santana’s Bar & Grill, an open-air beach shack, the island’s best-known restaurant.

Their deep-fried lobster is amazing! They have an assortment of seafood dishes, plus chicken and barbeque ribs. They have a great view by the beach with occasional sharks in the water.

After Santana’s, next door, we can grab a rum cake at Mom’s Bakery. Mom’s Bakery cake is not just good, it’s spectacular! They only have a options to choose from, but that just means it’s definitely made from scratch. Get the Bahamian to-die-for rum cake that crumbles to the touch and melts in your mouth? Your won’t be disappointed. If mama herself is there, ask her for a selfie together.

But that’s just two of the reasons people are drawn to this lovely island connected to Great Exuma to the north by a narrow bridge. Rolling green hills, purple morning glories spilling over fences, small settlements with only a dozen houses, and glistening white beaches make a romantic afternoon escape. Near Williams Town is an eerie salt lake, still and ghostly, where salt was once scooped up and shipped away. You can hike old footpaths and look for ruins of old plantation buildings built in the 1700s near the Hermitage, but you’ll have to look beneath the bushes and vines to find them. Some other sites to see are: 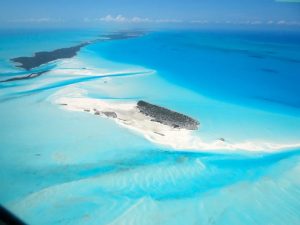 With the easy, laid-back atmosphere native to the Bahamas, Little Exuma has stunning scenery while still being close to the capital of George Town. Many locals and tourists alike make their way to enjoy kayaking, sailing, bonefishing, cave-diving and of course, sunbathing on the many beaches. You can even go snorkeling and visit the remains of a 200-year-old wreck, right offshore in about 6 ft of water. We appreciate Little Exuma for its seemingly remote and secluded location, but love the feeling of having restaurants featuring tasty local fare, tourist attractions offering historical information and activities and quaint shops.