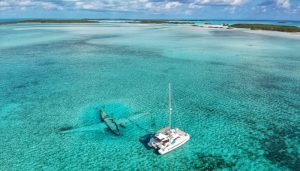 North of the Exuma Cays Land and Sea Park is Norman’s Cay, an abandoned former drug trafficking island that was run by Carlos Lehder, which explains its runway. It’s now owned by the Bahamian government.

With its 10 miles of rarely trod white beaches, you can snorkel around the smuggler’s plane wreck, which rests in just 10 ft of water on the south-west coast of the island. For nature lovers, try a barefoot walk on Twinkie Beach to find seashells and then have lunch or an early dinner and that it’s-5-o’clock-somewhere beach cocktail at Norman’s Cay Beach Club at McDuff’s Restaurant to watch the sunset.