Bitter Cay Iguanas are used to human interaction and, generally, pretty friendly. However, they will only let you get so close.

Bitter Guana Cay, also known as “Iguana Beach” is a stunning tropical oasis and home to an endangered species of Bahamian Rock Iguanas in the Exumas. Iguana Beach is uninhabited, except for hundreds of rock iguanas.can only and be reached by boat.  This is one of the few places where you can still find these fascinating creatures. The iguanas are friendly and welcoming to visitors who bring them vegetables.

The iguanas on Iguana Island Bahamas are mostly about two feet in length, however, they can grow up to four feet from head to tail. They are brown with a distinctive pink color.

The population of Northern Bahamian Rock Iguanas is, for the most part, herbivorous — making its diet a plant-based itinerary. However, that is not to say it is not supplemented with the occasional dead crab or bird. They do not require any liquids in their diet especially if the plants they feed on are succulent. Northern Rock Iguanas can live up to forty years.

Because of their isolation on the island, they are indigenous and not found anywhere else in the world. Because of this, scientists have traveled the world over to study the Bahamian Rock Iguanas and their prehistoric features which resemble their dinosaur ancestors. 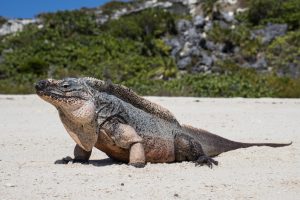 A Bahamian Rock Iguana on the beach at Bitter Guana Cay in the Bahamas Exuma islands.

These harmless lizards are threatened by poaching and supplemental feeding by tourists. Because they are endangered, treating these wild creatures with respect is critical to their long-term survival. We won’t feed them, but we can still take a selfie with them, right?

There are numerous beaches on the island and snorkeling is a very popular activity among tourists. The shallow pools filled with beautiful coral and marine life are particularly interesting. On the east shore, one can witness crashing waves. With a good eye, you may be able to see Nicholas Cage’s private island.